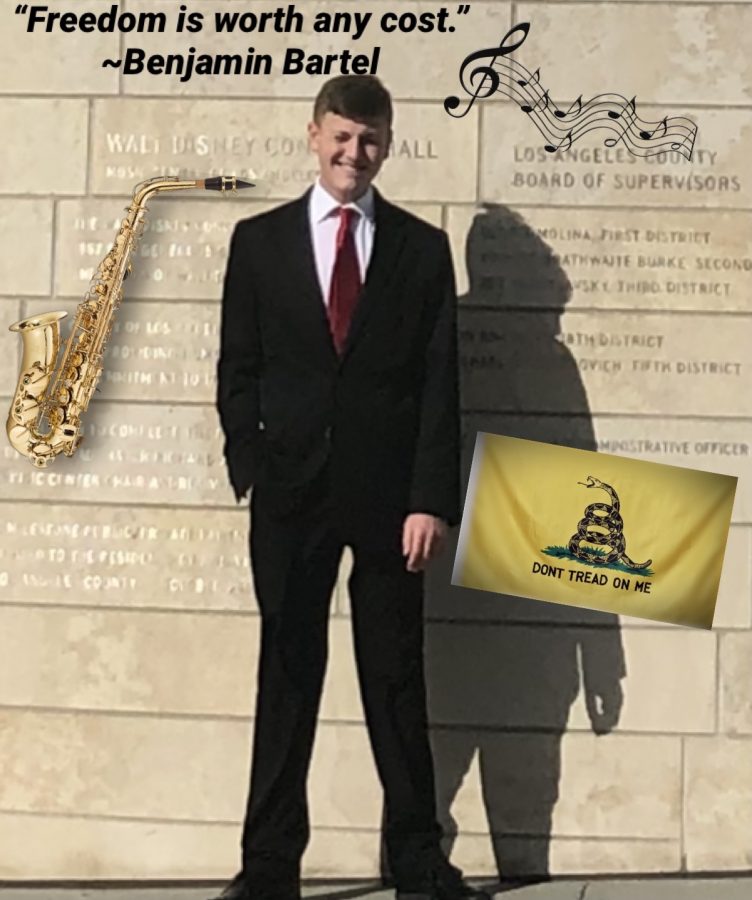 It can be difficult to understand any given person if you do not know the basic information of their lives. Junior at Saugus High School, Benjamin Bartel at 16 years old is heavily involved in advanced academics, is musically literate and is also politically active. He continues to be “active” everyday when the young author takes his thoughts and opinions on society and lays them out in a book already 200 pages and counting!
In an interview with The Scroll he disclosed that he has two periods of band, not including jazz band, is enrolled in Aerospace Engineering, AP Language and Composition (AP Lang), AP United States History (APUSH), AP Environmental Science (APES) and AP Calculus. With a more than busy schedule you would think that he doesn’t have much time to enjoy his high school experience.

On the contrary, Bartel is a lover of knowledge and finds joy in learning and is very passionate about music, thus his three periods dedicated to staying musically intelligent. He describes his love for music as a “conveyance of emotion through something that has existed for a long time.” Taking time to put a special praise on how music,“has a unique ability to break the language barrier making it something everyone, and all of us can enjoy.”

He currently plays the saxophone, flute and has played the clarinet though he is still capable of playing, but does not as often as he’d like, and the same goes for the bassoon. Besides the bassoon he has a fondness of the french horn, saying “there’s a reason in an orchestra they set the french horn aside,[…]it can convey so much power and so much force. It conveys so much emotion where no other instrument can truly compete.”

Bartel proceeded to say, “some of my favorite passages are just where the horn is blaring at you, and that’s when you can tell, when the horns blaring like that, it’s just trying to scream something at you that the composer had no other way to deliver.”

This thirst for knowledge does come at a price, on average his passion for his education and love for music costs him about two to four hours a night for homework and one or two hours for saxophone practice.

Nevertheless, he makes time to attempt a political discussion every morning growing his book by a page. Bartel’s in-progress literature is called In The People I Trust. When asked the meaning behind the title, he answered,“It’s a few words off the phrase ‘In God We Trust’ [directed back] at the government as to say look you came up with this phrase, but I will remind you that the people make you who you are today. The people gave you your power and the people allow you to exist and you would not exist without them.”

Though politics are usually argued about, he mainly started writing this book of his to evoke a political awakening. One where people listen to one another, this is because he believes that when any political side believes strongly in their own idea they immediately block out the opposing view.

This is true psychologically as well as ideologically, it has been proven that even when faced with facts that interfere with our core beliefs, our brains can flip that information to prove ourselves correct. PhD professor of psychology at the University of Queensland, Matthew Hornsey, studies the process that influences people’s brains to accept or reject scientific messages.

Hornsey says “It’s almost as though the sophisticated approach to science gives people more tools to curate their own sense of reality.” This effectively demonstrates why Bartel sees the urgency in publishing his book. Bartel stated, “I feel like if I don’t write this book well enough or soon enough it will be too late, and the message that must be delivered will not be delivered in time.”

With passages stating his overall goals and what he hopes to achieve in publishing his book, The Scroll proudly presents excerpts from In The People I Trust~Saugus High School’s very own Benjamin Bartel:
“The goal of this book is to highlight the centuries of development that has allowed for such gentle governments to rule, values which have eroded severely.”

“I am for democracy, but a more fair one. And I am for a government, but not a singularity which will absorb every bit of information and wealth belonging to its citizens.”

“Do not take freedom for granted. Ronald Reagan once said, ‘Freedom is never more than one generation away from extinction.’”

“No matter. And I suspect many of my teachers are left leaning as is the norm, yet that is no object. I make it my duty to remain on good terms with them at all times.”

“Democracy is a system far from perfection, but the founders laid out that themselves, that posterity, would try to form a more perfect union. I ask that we unite as Americans, not divide under the pretense of political beliefs or any other category.”